The report of the Task Force on Access to Health Care in Texas, Code Red: The Critical Condition of Health in Texas (Code Red Report), was issued April 17, 2006, at a news conference and public symposium at the James A. Baker III Institute for Public Policy at Rice University. The Task Force on Access to Health Care in Texas (Task Force) is a nonpartisan group sponsored by all 10 of the major academic health institutions in Texas, including Baylor College of Medicine, Texas Tech, Texas A&M, North Texas, and the six health institutions of The University of Texas System. Task Force membership includes representatives from large and small employers in Texas, health care providers, hospitals, medical schools, health policy experts, as well as community and business leaders. The Task Force collected data, identified and assessed the magnitude of the problem of the uninsured in Texas, and made recommendations for consideration by policymakers. The resulting report, summary, and appendices were evidence-based and peer-reviewed by independent experts.

After its release, the Code Red Report reached a wide variety of interested groups. During the 80th Texas legislative session, there was considerable attention to many of the issues raised in the report. A detailed summary of relevant legislation can be found at the Code Red Web site: www.coderedtexas.org. Among the important developments was the passage of Senate Bill 10, which authorized the State to submit an 1115 Waiver to the U.S. Department of Health and Human Services to increase federal Medicaid funds available to expand coverage and improve care delivery opportunities, which the Task Force recommended. These federal funds can be used to subsidize health insurance premiums and health benefit plans, including those consistent with a Task Force recommendation to adopt a “three-share” program for employees of small employers.

Other Task Force recommendations that received significant attention included the development of an electronic health record for Medicaid patients and the uninsured, changes in the State Children’s Health Insurance Program (SCHIP) which increased coverage for an additional 125,000 children, increased funding for graduate medical education and nursing education, and additional initiatives to improve the health of Texas schoolchildren.

As part of a judicial settlement of a longstanding lawsuit regarding the adequacy of Medicaid services for children (Frew Settlement), the Texas Legislature approved more than $707 million, which, when matched with federal funds, will provide almost $1.8 billion for the 2008–2009 biennium to improve medical and dental health care for children on Medicaid.

On October 22, 2007, a conference was held to receive additional comments from a wide variety of stakeholders regarding efforts to increase access to care for the uninsured in Texas. This report is an update to the Code Red Report issued April 17, 2006, to reemphasize certain initial recommendations and provide new findings and further recommendations in 2008. 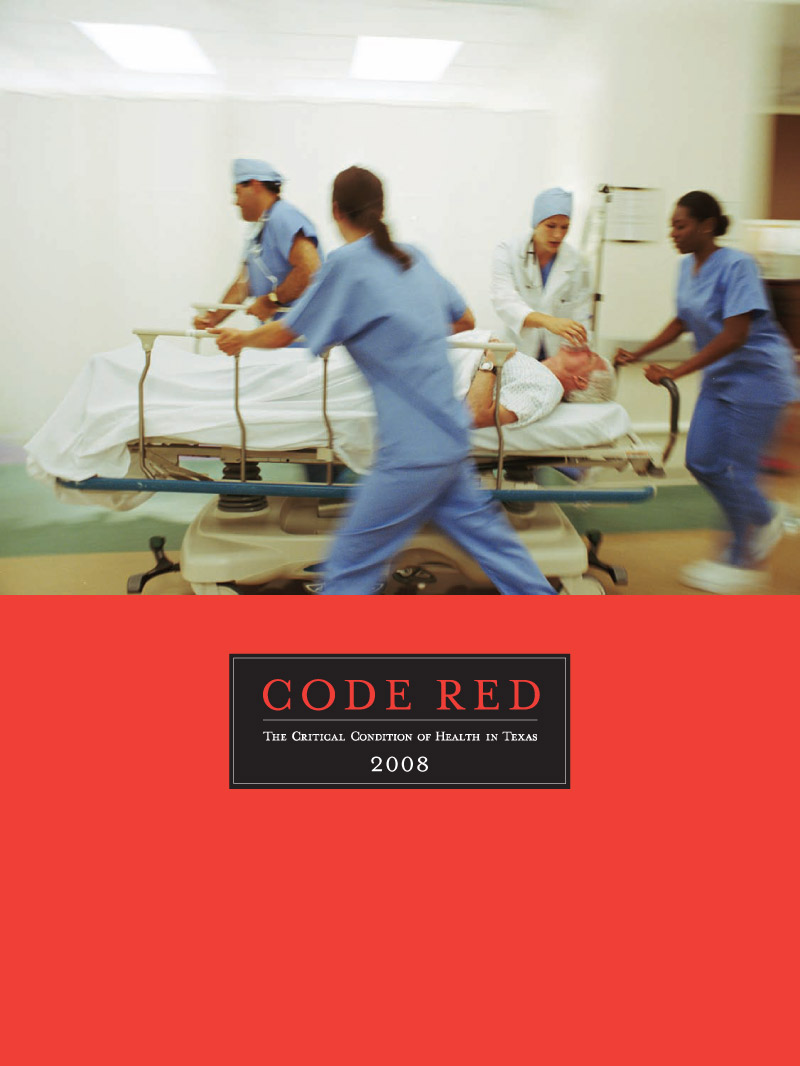