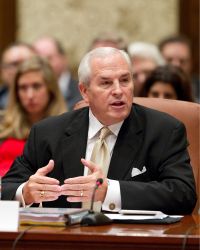 WM. EUGENE "GENE" POWELL, of San Antonio, Texas, was appointed to a six-year term on The University of Texas System Board of Regents by Governor Rick Perry in February 2009. He served as Chairman of the Board from February 8, 2011 through August 22, 2013.

Vice Chairman Powell also serves as a member of the Special Advisory Committee on the Brackenridge Tract that was created in August 2009.

He serves on the Facilities Planning and Construction Committee, the Finance and Planning Committee, the Health Affairs Committee, as the Regental Representative on the Texas Growth Fund Board of Trustees, and as the Special Liaison on South Texas Projects.

Raised in Weslaco, Texas, Powell is a native of the Rio Grande Valley. He earned a Bachelor's degree in Finance at The University of Texas at Austin while on a full athletic scholarship playing football under Coach Darrell K Royal. He later earned a Master's degree in Finance from U. T. Austin before returning to the Valley.

In 1983, he moved to San Antonio, Texas, to become the President of The Quincy Lee Company, which at the time was the city’s largest commercial real estate development company.

In 2004, Powell co-founded the medical software company AirStrip Technologies with his son, Cameron Powell, and Trey Moore. He served as the Chief Executive Officer and as its Chairman. AirStrip’s technology is used by hospitals nationwide to transmit wave form data in real time from the hospital to physicians' cell phones anywhere in the world that offers a cellular connection. AirStrip's initial product was designed to be used by the hospitals' labor and delivery units and physicians delivering babies, and the product line has been expanded to include the transmission of critical patient data in cardiology, the ICU, ambulances and across all of a hospital’s monitored beds.  He is also a member of the Board of WellAware Holdings, Inc.

Powell is married to the former Dana Dillard of Pearsall, Texas. They have two sons. Cameron Powell, a graduate of Brown University and The University of Texas Medical Branch at Galveston, lives in San Antonio. Hunter Powell is a graduate of The University of Pennsylvania and Westminster Seminary and has received a doctorate from Cambridge University, England. The Powells also have six grandsons and one granddaughter. It is also interesting to note that Mr. Powell's grandfather, Forrest Powell, graduated from the UTMB School of Pharmacy in 1914.