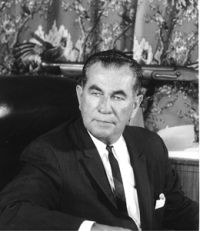 WILLIAM HENRY BAUER, a native of Texas, was born in Port Lavaca, Calhoun County, Texas, on February 14, 1907, the son of the late Capt. Frank E. and Elizabeth (Wiegand) Bauer.

Mr. Bauer was co-founder of Bauer Dredging Co., Inc. and from 1936 through 1965 guided this small Texas company to a postion of recognized world leadership in its field. Until recently, Mr. Bauer was Chairman of the Board and Chief Executive Officer of Bauer Dredging Company, Inc. and its subsidiaries; was a former Member of the Board of Directors of the Panama Canal Company, and was elected President of the World Dredging Association at its annual meeting in Rotterdam, The Netherlands, in 1968, and was elected Chairman of the World Dredging Association in July of 1970.

Despite his busy schedule, Mr. Bauer has given freely of his time in the promotion of a better way of life for his home town, his state and his country. He has been extremely active in all waterways legislation and as a Director of the Gulf Intracoastal Canal Association for 30 years has been a dynamic force in the creation of this great inland waterways system and its continuation to Mexico.

Mr. Bauer’s interest in waterway development is still very keen, and as the current Chairman of the Executive Committee of the Gulf Intracoastal Canal Association he continues his efforts for a better and greater system of waterways to meet increased demands.

In 1965, Mr. Bauer was appointed by Governor John B. Connally as a member of the Board of Regents of The University of Texas System. Mr. Bauer, as Chairman of the Executive Committee, has, and will continue, until the expiration of his term in 1971, to give freely his best efforts to the promotion of higher education for the youth of his native state.

As a Past President of the Port Lavaca Chamber of Commerce, Mr. Bauer has long supported the progress of his community and was primarily responsible in obtaining for Calhoun County its first large industry, the Aluminum Company of America’s complex at Point Comfort, which was destined to change this area from a sleepy fishing village to one of excellent industrial climate.

As a rancher, Mr. Bauer owns and operates large ranches in Jackson and Calhoun Counties, Texas, which are well known for their progressive management and their use of advanced technology.

Mr. Bauer is married to the former Louise Stjepcevich of Galveston, Texas, and maintains homes in Calhoun and Jackson Counties, Texas.

Bauer House, the official home of the Chancellor of The University of Texas System, is located in the beautiful Tarrytown neighborhood near the heart of Austin, Texas. Surrounded by three acres of manicured grounds, inviting gardens, and towering native Texas trees, the traditional Georgian/Federal style home represents an understatement of elegance and grace.

Bauer house is named for former UT System Regent W. H. Bauer and his wife, Louise, of LaWard, Texas. Regent Bauer served with distinction on the Board of Regents from 1965 - 1971. The stately home is the site of many official UT System functions enjoyed by public and higher education leaders, donors and supporters, and members of the broader community, including students, faculty, staff, alumni, and friends of UT System.

The interior of the home is furnished and decorated with items from many priceless antique and art collections of the Harry Ransom Humanities Research Center and the Jack S. Blanton Museum of Art, both at UT Austin. A majority of the antique furnishings and accessories were contributed by Interstate Theaters founder Karl Hoblitzelle and his wife, Ester, and date to the 18th and 19th centuries. The Hoblitzelles were longstanding friends with Chancellor Harry Hunt Ransom, who served as Chancellor from 1961 - 1970, and his wife, Hazel. Plans for the renovation of Bauer House were initiated during the administration of Chancellor Ransom, and the home was first occupied by Chancellor Charles A. LeMaistre and his family in 1971.

The original property, owned by R. B. Cousins, Jr., extended from present day Clearview Street to Gilbert Street in an area known as Hillview Oaks. In 1936, Mr. Cousins built a Georgian/Federal style home for his family on the property. In later years, the home was sold to Thalbert Thomas and then to J. M. and Gloria Miesch. Mrs. Miesch, who was widowed, later married Earl E. Shouse, and the couple generously conveyed the property to the U. T. System Board of Regents in 1968.

The home was evaluated for modernization as well as building codes required for its use as a public facility. Due to excessive cost projections for renovations, the original home was demolished and a more suitable structure designed and built in its likeness. The new home included a library addition, larger kitchen facilities, and family quarters on the second floor. The architect was Wolfe Jessen of Jessen, Jessen, Millhouse, Greeven, Crume, Day, and Newman.

The Charmaine and Frank Denius Pavilion opened in the Fall of 2005 and allows the UT System to further open its doors to the community. The pavilion seats up to 60 persons and is used for meetings, workshops, training seminars, and dinners. Built with a generous gift from the Denius family, the pavilion is located behind the main house, overlooking the beautifully manicured grounds.

Bauer House has been the home of eight Chancellors and their families: