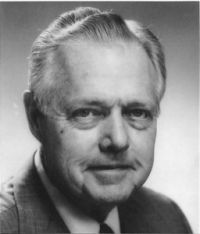 W. A. "Tex" Moncrief, Jr. of Fort Worth was appointed to a six-year term on the Board of Regents of The University of Texas System by Governor William P. Clements in 1987.

Mr. Moncrief has been an Independent Oil and Gas Producer since 1946. His offices are located Building in Fort Worth.

He graduated from the Culver Military Academy in 1937, and from The University of Texas at Austin with a B.S. degree in Petroleum Engineering in 1942. In 1983 he was honored as a Distinguished Engineering Graduate by U. T. Austin.

Regent Moncrief served as a naval officer in the South Pacific during World War II. He was born on March 27, 1920, in Little Rock, Arkansas, the son of William Alvin and Elizabeth Bright Moncrief.

He is married to the former Deborah Beggs and they have six children, five sons and one daughter.

Mr. Moncrief is active in professional, civic, and community affairs. 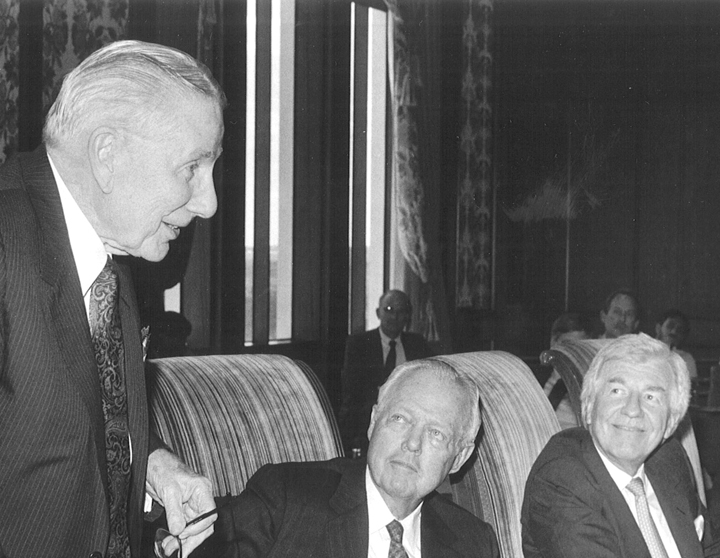 A $3 million gift by W.A. “Tex” Moncrief Jr. to help fund three faculty chairs at The University of Texas at Austin will have a dramatic impact on future scientific advances at the university in areas including medicine, national security, transportation, communication and the manufacturing of new materials, Associate Vice President for Research J. Tinsley Oden said.

Moncrief, a former member of The University of Texas System Board of Regents, donated the gift to the university’s Institute for Computational Engineering and Sciences (ICES) to be used in recruiting and retaining leading scholars who are at the top of their fields nationally or internationally, said Oden, holder of the Cockrell Family Regents’ Chair in Engineering #2 at the university.

Moncrief’s gift will support the creation of more advanced computer models to help scientists use simulations in evaluating the many possibilities within the realm of their research, Oden said.

“Some of the most exciting advances in the near future will be computer models of the human body that will lead to patient specific therapies, surgical procedures and a deeper understanding of the functions of each individual’s body,” Oden said. He said a better understanding of the human body will help researchers design new drugs and drug delivery systems to help people with cancer and other illnesses.

“Simulation is becoming more and more an integral part of the manufacturing of these systems, ” Oden said. “Tex Moncrief’s gift will substantially strengthen our faculty in several dynamic and powerful areas of research,” said Dr. Larry R. Faulkner, president of The University of Texas at Austin. “He has shown great vision, once again, by giving his support to researchers who will improve the lives of Texans and many others around the world. ”

Moncrief said, “President Faulkner and Dr. Oden made a very strong case for support of the ICES program, and I am grateful for the opportunity to invest in faculty endowments associated with this extraordinary enterprise.”

Oden said he is pleased with Moncrief’s enthusiasm for the interdisciplinary programs at ICES and the fact that Moncrief “appreciated their significance to the university, the state and, more broadly, the nation.” “His generous donation will be a great help to the university in achieving a leadership role in these critically important areas of science and technology,” Oden said.

He said the establishment of several special ICES endowments is critically important to the fulfillment of the institute’s mission of providing the infrastructure and intellectual leadership for developing outstanding interdisciplinary programs in research and graduate study in the computational sciences and engineering and in information technology.

The ICES plan was that four faculty chairs would be created to recruit and retain leading scholars who are at the top of their fields nationally or internationally.

Oden said the university is recruiting top candidates for the two open chairs and hopes to have them filled by the end of this academic year.

Moncrief, an alumnus from the university, has contributed nearly $10 million in gifts to the university over the years to support a variety of areas, including architecture, athletics, the Center for American History, engineering, financial aid, fine arts, the law school, the business school and natural sciences. In recognition of his financial support of the athletics department, the university in 1997 named its athletic center the W.A. “Tex” Moncrief Jr.-V.F. “Doc” Neuhaus Athletic Center.

Moncrief’s interest in University of Texas at Austin athletics dates back to the late 1930s, when he was the No. 3 golfer on the university’s golf team. He was graduated in 1942 with a degree in petroleum engineering and went to work as an engineer for Standolind Oil and Gas Co., the forerunner of Amoco. In 1943, Moncrief left the company to serve in the U.S. Navy, where he was commissioned as an officer in the South Pacific Theater. After the war, he joined his father’s oil business, which had interests in Texas, Wyoming and Florida. Moncrief has been president of Montex Drilling since 1946 and is now president and owner of Moncrief Oil. His accomplishments as an engineering alumnus were recognized in 1983 when he was honored as a Distinguished Engineering Graduate.

Moncrief’s interest in higher education led to his appointment to a six-year term on The University of Texas System Board of Regents by Texas Governor Bill Clements in 1987.

The Institute for Computational Engineering and Sciences (ICES) is an interdisciplinary research center for faculty and graduate students in computational sciences and engineering, mathematical modeling, applied mathematics, software engineering, and computational visualization. Organizationally, ICES reports to the vice president for research, and draws faculty from 17 academic departments.

The institute supports five research centers and numerous research groups, but new research units in distributed and grid computing, computational biology, biomedical science and engineering, computational materials research and many others are planned over the next four years. It also supports the CAM Program, a graduate degree program leading to the master’s and Ph.D. degrees in computational and applied mathematics.

Retrieved from The University of Texas at Austin website on October 6, 2006