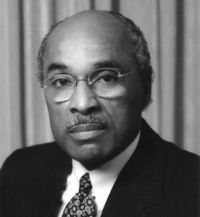 Since 1978, Regent Holmes has been an Associate Professor of Preaching at the Perkins School of Theology at Southern Methodist University in Dallas. He has been the Senior Pastor at St. Luke llCommunity I1 United Methodist Church since 1974.

Mr. Holmes was born on February 1, 1935, in San Angelo, Texas. He received a Bachelor of Arts degree from Huston-Tillotson College in 1956 and a Bachelor of Divinity from Southern Methodist University in 1959. After receiving a Master of Sacred Theology from Southern Methodist University in 1968, he accepted an honorary Doctor of Divinity degree from Huston-Tillotson in 1970.

From 1958 to 1968, Regent Holmes was pastor of the Hamilton Park United Methodist Church in Dallas and District Superintendent of the North Texas Conference from 1968 to 1974. In addition to his work as a pastor, Holmes was elected to the Texas State Legislature and served from 1968 - 1972. He represented Dallas County, Place 5.

Mr. Holmes is a member of many community organizations including the Society for the Study of Black Religion, the American Academy of Homiletics and Black Methodists for Church Renewal. He serves on the board of directors for the State Fair of Texas and Northpark National Bank.

He is past president of The Greater Dallas Community of Churches, Chairperson of the North Texas Conference Council on Ministries and is a life member of the National Association for the Advancement of Colored People (N.A.A.C.P.). For several years, Holmes has been a delegate to the General and Jurisdictional Conferences of the United Methodist Church. He is Co-Chairperson for World of Difference and is a member of the Task Force on Educational Excellence for the Dallas Independent School District.

Regent Holmes is married to the former Dorothy Burse.

For 17 years, Zan Wesley Holmes has been the pastor of St. Luke Community United Methodist Church. During that time, he also taught at Southern Methodist University's Perkins School of Theology. The 55-year-old Holmes spent more than four years in the Texas Legislature and was formerly president of the Greater Dallas Community of Churches. Last month, Holmes received the 1990 Peacemaker Award from the Dallas Peace Center. The award recognizes individuals for their roles in advancing the causes of peace, justice and civil rights.

It is this diverse background that Holmes brings to the UT System that promises to conform with Gov. Richards' "New Texas" and break what many perceive as the regent stereotype of the "rich oilman." "Certainly in my case I'm not a rich oilman," Holmes said Wednesday in a telephone interview from St. Luke's. "I really would like to think that Governor Richards appointed me because of the experiences I have had in higher education, the chances I've had in working with diverse groups of people in our Texas society and the commitment I have to education and to the future welfare of this state." He added, "I am pleased she is moving in that direction with her selection of regents."

Holmes said he is confident that his background as educator, mediator and pastor will give the Board of Regents the angle necessary to reform the educational system into one that serves the future needs of all students and educators. "I hope to bring to the board my own experiences that I've had in higher education and as an African-American who was born and grew up in this state," he said. "Having served in the Legislature, I have had experiences that I think will enable me to represent a number of the concerns that are held by African-Americans in our state and also I have had experiences in other cultures that will enable me to communicate those concerns."

Few of the past regents have had the background in educational instruction that Holmes has. Many hope that his experience with students will, in turn, better educate the entire board on student issues and needs. "I am in higher education - a professor on a university campus - and I have dealt with many of the issues that I'm sure are present at the University of Texas System, even though that system is much larger than Southern Methodist University. "Some of those similarities and concerns of students are in how you provide access to education, the concern for hiring and maintaining the best faculty that is available, and the concern for diversity in education - a multuricultural education that prepares students to live in a diverse society. I've had experiences in representing those concerns."

Holmes said he is dedicated to expanding the state's education curriculum to cover a broader range of cultural perspectives, which he feels would be key to a complete education. He is also committed to making the UT System available to all those who desire to take part. "I have a concern about the overall quality of higher education in our state. I am wanting it to be of the highest quality that is possible, given the resources that we have. I'm concerned about accessability to that education to all of the people in our state and removing any barriers which may exist that don't make that education accessible to everybody," he said. He added, "I think having a curriculum that expresses diversity and a faculty that expresses that diversity is certainly essential.

Also, enabeling the university to take the "uni' seriously - the u-n-i - and becoming a uni-versity in a way that all of its departments are interrelated. That is, the humanities in relation to the sciences and so on." "I think one of the challenges for me, today, in higher education is that even though we crave people in scientific and technical fields, we still don't have a very good finished product if we have not given those persons training that enables them to be human and relate with people in a healthy way," he said.

Because the work force and the future of Texas depends on a well trained work force, both professional and otherwise, Holmes says it is necessary to give students a multicultural education. "I think the key to a multicultural education is enabling everybody to understand that it's a win-win situation. Given the environment in which we live today, it seems to me that to be educated, to be truly educated, is to be able to communicate with persons from diverse backgrounds - enabling people to grasp that idea to me is the key. "I look forward to the challenge of serving on the Board of Regents. It's an awesome responsibility, I'm finding out. I'm looking to working with the other regents and I just trust, hope and pray that together we can make a difference for good for higher education in our state."