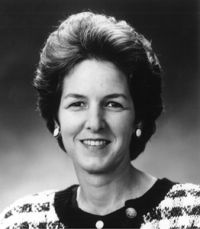 MARTHA E. SMILEY of Austin was appointed to a six-year term on the Board of Regents of The University of Texas System by Governor Ann Richards in 1993. She served as a vice-chairman of the Board from March 1995 to February 1997. She was Chairman of the Business Affairs and Audit Committee in 1995-1997 and has served as Chairman of the Special Committee on Telecommunications and Minorities and Women since 1997.

As a Principal in The EDGS Group, Ms. Smiley currently provides strategic planning and business development consultation to telecommunications companies having retired as a partner from the law firm of Bickerstaff, Heath & Smiley where she served from 1981 to 1995. From 1979 to 1981 she was counsel for Region VI of the Environmental Protection Agency, and from 1973 to 1979 she was chief of the taxation division of the Texas Attorney General's Office. From 1972 to 1973 she was a staff attorney for the Law Research Corp.

Ms. Smiley's many civic and community activities have included serving as chair of the Collaboration Committee of the A-Plus Coalition of the Austin school district, serving as commissioner and vice chair of the Texas National Research Laboratory Commission, and serving as a member of the citizens advisory committee for the start-up of the Texas state lottery.

Ms. Smiley received the 1991 Outstanding Achievement Award from the Travis County Women Lawyers. In 1978 she was named the Outstanding Woman in Justice by the American Association of University Women, and in 1977 she was selected as the Woman of the Year by the Texas Women's Political Caucus.

Ms. Smiley, a native of Mission, Texas, received a bachelor's degree in sociology from Baylor University in 1969, where she was President of the student body, and a law degree from The University of Texas at Austin in 1972. She has been a member of the board of directors and the executive committee of the Texas Law School Alumni Association and was recently named to the Advisory Board of Directors of Entergy Corporation.