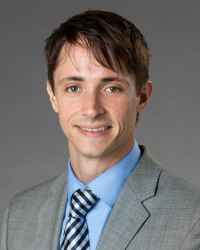 JUSTIN A. DRAKE, Galveston, Texas, was appointed to a one-year term, beginning July 2, 2015, as Student Regent for The University of Texas System by Governor Greg Abbott. He is a fourth-year graduate student in the Biochemistry and Molecular Biology Department at The University of Texas Medical Branch at Galveston focusing on computational biophysics. His research relies on using some of the world's most advanced supercomputers to study the structural and thermodynamic properties of short, flexible proteins. Regent Drake graduated with honors from The University of Texas at Austin with a bachelor's in Biomedical Engineering and a Certificate in Scientific Computation. While at U. T. Austin, Regent Drake began his research career early and was motivated by the fact that he could combine fundamental engineering principles with computational science to tackle complex biological problems. He was recently awarded the Blue Waters Graduate Research Fellowship for 2015-2016 that provides funding and guidance for his research as well as access to the Blue Waters Supercomputer.

Regent Drake is also passionate about serving the UTMB and Galveston community. As part of UTMB's Student Government Association, he has served as a Senator, Senate Chair, and Executive Vice President and has chaired the Academic Resources, Community Outreach, and Intramural Sports Committees. He has organized and taken part in volunteering opportunities that strengthen UTMB's relationship with the Galveston community. Additionally, he is very interested in STEM education and, as part of UTMB's Together Educating About Math and Science program, has visited a local underprivileged middle school to educate young students about the exciting possibilities of a career in science. With "Big Data" continuing to permeate all fields of science, his interests also include initiatives aimed to expand both educational programs in and access to high-performance computing resources for students and scientists throughout their careers.

He enjoys traveling, intramural sports, fishing, and volunteering at the Galveston Island Humane Society with his wife, Christina, a critical care nurse at UTMB.