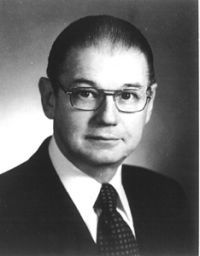 JENKINS GARRETT, Fort Worth attorney, was appointed to The University of Texas System Board of Regents in 1969 by Governor John B.Connally. Mr. Garrett, whose term will expire in January 1975, is chairman of the Regents’ Land and Investment Committee. He also is a member of the Board for Lease of University Lands.

Many of his activities have been related to education. From 1965 to 1971 he was a member and chairman of the Board of trustees of the Tarrant County Junior College District. In 1964 he served on the Governor’s Committee on Education Beyond the High School, which sought to outline the needs of Texas higher education.

In addition, Mr. Garrett served from 1960 to 1968 as trustee and finance committee chairman for the Southwestern Baptist Theological Seminary in Fort Worth. He continues as a director of that seminary foundation. He is also a member of the Board of Directors of the Fort Worth Chamber of Commerce.

Educated at U. T. Austin, where he received both the B.A. and LL.B. degrees in 1937, Mr. Garrett was an outstanding student and served as president of the student body in 1936. He earned a Master of Laws degree from Harvard in 1939.

He was a special agent for the Federal Bureau of Investigation, 1940-44, and a regional attorney for the War Production Board, 1944-45. For the next 20 years he was general counsel for the J.M. and 0.P. Leonard Interests in Fort Worth. He has been in the private practice of law since 1965, with the firm of Garrett, Stahala, Gandy & Horger.

In addition to his law practice, Mr. Garrett is a director of News Citizen Newspapers, as well as of the State Reserve Life Insurance, Chemical Lime, Inc., and Western Savings and Loan Association.

Mr. Garrett is one of the founders and first president of the Collectors' Institute, which is co-sponsored by U. T. Austin's Humanities Research Center and the Texas State Historical Association. His fine private collection relating to Texas History and the Mexican War is now housed at the University of Texas at Arlington.

The Jenkins Garrett Foundation in 1970 was instrumental in having some of Professor Walter Prescott Webb's writings republished in a volme titled History as High Adventure.

Mr. Garrett is a member of local, state and American Bar Associations and the Texas Bar Foundation.

Born December 14, 1914, in Caldwell, he is married to the former Virginia Williams, and they are the parents of two daughters and a son.

Jenkins Garrett, prominent Fort Worth lawyer and philanthropist, dies at 95

Jenkins Garrett, a prominent Fort Worth lawyer and philanthropist who also accumulated one of the state’s most comprehensive collections of Texas historical artifacts, died at his home late Wednesday. He was 95.

In Fort Worth, Mr. Garrett was perhaps best-known as the longtime attorney and close friend of Marvin and Obie Leonard, owners of the iconic Leonard Bros. department store.

In the early 1970s, after years of serious collecting, he and his wife, Virginia, donated about 10,000 pieces of Texana to the University of Texas at Arlington. And until recently, he continued adding pieces to the collection that bears his name.

But he is also remembered by friends and family as a man who taught a Sunday school class at Rosen Heights Baptist Church for more than 70 years and left standing instructions at work to be interrupted whenever a relative called.

"Dad’s guiding philosophy is love," his daughter, Dianne Powell, wrote in a recent tribute. "Love for family, love for community, friends and mankind. I don’t know anyone who did not admire or respect him."

Mr. Garrett was born in Caldwell on Dec. 14, 1914, the youngest child of Jesse and Sudie Garrett. Jesse Garrett left a law practice for the ministry, entering Southwestern Baptist Theological Seminary in Fort Worth. He was an early pastor of Rosen Heights Baptist, on Fort Worth’s north side.

His son began a long association with the Leonard brothers as a 13-year-old.

"He went downtown, calling on every business at the south end of the business district," Cissy Stewart Lale, a Fort Worth writer who did extensive research on Mr. Garrett’s life, said in a 2001 speech.

"No one had work for a boy. It was the Depression. [But the Leonards] hired him for $5 a week and a bicycle to run errands."

He continued that part-time employment while attending the University of Texas as an undergraduate, and as a UT law student.

He graduated from law school in 1937. In his college years, Mr. Garrett often rode back and forth to Austin on Leonard produce trucks.

A passion for history

Mr. Garrett later credited a junior-year history class with igniting what would become a lifelong passion. His professor was the legendary Walter Prescott Webb.

"I remember him saying that it wasn’t Webb’s delivery as a lecturer," said Gerald Saxon, dean of the UTA library and a close friend. "It was the fact that [Webb] was able to connect the dots in history, the cause and effect or how one event leads to another."

Webb stressed the importance of Texas to the development of the American West and the nation, Saxon said. That helped inspire Mr. Garrett’s Texana collecting, which began in earnest in the 1950s. A decade later, he bought other collections that "pushed him over the edge into compulsive collecting," Saxon said.

After graduating from UT, Mr. Garrett went on to study law at Harvard University under Supreme Court Justice Felix Frankfurter. During World War II, when colorblindness caused him to fail a military physical, Mr. Garrett joined the FBI and served for several years on the West Coast.

Mr. Garrett met Virginia Williams, also a Fort Worth native, at a church picnic. The couple married in 1941 and had three children.

After the war, the Garretts eventually made their way back to Fort Worth, where Mr. Garrett became general counsel for the Leonard brothers. But his duties at the department store often went far beyond legal issues.

He represented the Leonards in political and civic matters and "occasionally found himself pressed into selling ladders or pants when the [department store] crowds got too big," according to Texas Merchant, a Marvin Leonard biography by Victoria and Walter Buenger.

"He was my daddy’s 'everything man,’ his go-to man," said Marty Leonard, daughter of Marvin Leonard, who died in 1970.

Mr. Garrett left the Leonards in 1965 to form his own law firm but continued to advise the family until recent years. Dee Kelly, another prominent Fort Worth lawyer, said Mr. Garrett was a legal giant. "He was a pillar of the legal community for years and years, admired and respected by all," Kelly said.

His decision for UTA

A longtime advocate for education, Mr. Garrett also served on the boards of Southwestern seminary and the Tarrant County Junior College district. A friend and law school classmate of former Texas Gov. John Connally’s, Mr. Jenkins was appointed by Connally in 1963 to the the governor’s committee on education beyond high school.

In 1966, Mr. Garrett began a six-year term on the board of regents for the University of Texas System. About that time, he began to contemplate a permanent home for his Texana collection, Saxon said.

"He bled orange," Saxon said. "But he told me he thought his collection would be lost at UT. They have huge collections like this, and he thought it would make a bigger impact at UTA. Plus, it would have the added advantage that he would be close to it here."

The Garrett Collection was formally donated to UT-Arlington in 1973. It was opened to the public a year later and remains on the sixth floor of the library. Survivors include his wife; daughters Donna Garrett of Fort Worth and Dianne Powell of San Antonio; son Jenkins Garrett Jr.; six grandchildren; and five great-grandchildren.