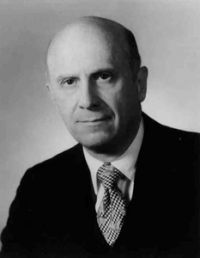 Joined Scurlock Oil Company in 1950, assuming Presidency in 1958, elevated to Chairman of the Board and C.E.O. in April, 1983; Vice President of Eddy Refining Company.

The Blanton Museum of Art

Excerpt from handout provided by the College of Business Administration at U. T. Austin honoring the 1997 "Hall of Fame" inductees:

Jack S. Blanton, Sr. was born in Shreveport, Louisiana, and graduated with a B.A. in history from The University of Texas at Austin in 1947. He took an L.L.B. degree from U. T.'s Law School in 1950, and in that same year joined Scutlock Oil Company. In 1958, he was elected President of Scurlock Oil and from 1983 until his retirement in 1988, he served as the company's Chairman of the Board and CEO. He is currently President of Eddy Refining company.

Blanton was elected to the U. T. Board of Regents in 1985 and in 1987 was elected Chairman, at a time when higher education in Texas suddenly was confronted with a 26% reduction in its budget. With dedication and indefatigable energy, Blanton worked to rally people to the cause, and in the summer of 1987, the Legislature passed and the Governor signed the largest tax increase in the State's history, much going to support higher education.

Blanton has devoted his life to the State of Texas, with education continuing to be a major facus. It is to The University of Texas at Austin, hoewever, that Blanton has made his greatest contributions. A Past President of the Ex-Students' Assocation, Blanton served on the Centennial Commission, and he is a member of the UT Development Board, the Littlefield Society, and the Executive Committee of the Chancellor's Council. In recognition for his many contributions, Blanton has been honored by The University of Texas School of Law, and in 1977, received the Distinguished Alumnus Award, U. T. Austin's highest honor.

From his father, Blanton learned that being involved is a lot more fun than being on the sidelines. Few have been more involved, or contributed more. To schools and libraries, museums and orchestras, to charitable organizations and hospitals, civic and religious groups, Blanton has given tirelessly of himself. He has been particularly active in health affairs, serving as a member of the Board of Managers of the Harris County Hospital District, as Vice Chairman of the Board of Trustees of the Methodist Hospital, and as a Director of the Texas Medical Center. Those in the Houston business community elected him Chairman of the Greater Houston Chamnber of Commerce, and in 1990, he was named Chairman of the Board of Trustees of the Houston Endowment, the largest philanthropic foundation in Texas.