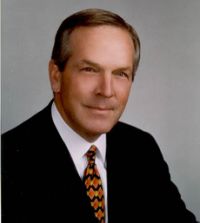 Oilman
U. S. Secretary of Commerce
U. T. Student

DONALD L. EVANS of Midland was appointed to a six-year term on the Board of Regents of The University of Texas System by Governor George W. Bush in February 1995. The Board named him Chairman in 1997 and reelected him in 1999. He resigned from the U. T. System Board of Regents in January 2001 after being named U. S. Secretary of Commerce by President George W. Bush.

Mr. Evans was chairman of the board, president, and chief executive officer of Tom Brown, Inc., an oil company, and a director of TMBR/Sharp Drilling, Inc. He is a member of the Independent Petroleum Association of America, co-chairman of the Midland Wildcat Committee, and a director of the Permian Basin Petroleum Association and the Permian Basin Petroleum Museum. He also is a member of the Young Presidents’ Organization-49ers and the Rocky Mountain Oil and Gas Association.

Mr. Evans, a native of Houston, is a graduate of Memorial High School in that city. He holds two degrees from U. T. Austin -- a bachelor of science degree in mechanical engineering (1969) and a Master of Business Administration degree (1973). Mr. Evans has been active in numerous civic groups and non-profit organizations. He is a member of the board of governors of Bynum School in Midland.

From 1990 to 1994 he served as a trustee of Memorial Hospital and Medical Center in Midland, and he is a past chairman of the Beefeater Ball of the Midland Cerebral Palsy Center. He serves on the board of the Scleroderma Research Foundation of Santa Barbara, California, and he has been active in the United Way of Midland, the YMCA, and Young Life of Midland.

Mr. Evans has been a member of the College of Business Administration Advisory Council at U. T. Austin since 1989. While a student at the University, he received the Texas Cowboys’ Bill McGill Award and was a member of Omicron Delta Kappa and Sigma Alpha Epsilon.

He was chairman of the 1995 Texas Inaugural Committee, which organized the inauguration activities for Governor Bush. Mr. Evans is active in First United Methodist Church of Midland. He has been chairman of the church’s finance committee, administrative board, and staff/parish relations committee.

Mr. Evans is married to Susan Marinis Evans. They have three children.

Excerpt from The McCombs School of Business Magazine, Fall/Winter 2002

Whether in the oil patch, in the business world or serving as U.S. Secretary of Commerce in his best friend’s presidential administration, Don Evans believes in and lives by the Texas Cowboys motto: “Give your best to Texas, and the best will come back to you.”

Evans says the University was a place he considered home “and where I began friendships that have lasted a lifetime. The University offered me the opportunity to succeed and the independence to fail. Fortunately, I believe I have succeeded more than I have failed.”

A native of Houston, Evans has had a long association with campus: He secured two degrees; met and courted Susan Marinis, his future wife. Later, while living and working in Midland, Texas, Evans became a donor to the schools of Law, Business, Engineering, the College of Liberal Arts, the McDonald Observatory and the athletics department; as well as serving as chairman of the Board of Regents. Evans was on the UT Board from 1995 until 2001. He was appointed chairman in 1997, a position he held for two consecutive terms.

Before joining the Bush Administration to lead the Department of Commerce in 2001, Evans served as president and CEO of Tom Brown, Incorporated, a large, independent oil and gas company. Between 1995 and 2000, Evans guided the company to a revenue increase from more than $40 million to more than $250 million.

As an undergraduate in the mid-1960s, Evans vividly recalls the anti-authority expressed by those opposed to the Vietnam War, as well as the Tower shootings, which he terms “the saddest, darkest day in the life of the University.”

“I also remember the Vietnam protests and the huge (protest) marches down Congress Avenue. I didn’t agree with those who protested, but I came away from that knowing that despite the differences on the issues, there are many more things that unite us than divide us. It makes me proud that my years on campus remind me of our nation’s strengths, our freedoms: of speech, of expression, of religion.”

While a student, Evans was a very popular figure on campus: he was an active member of Sigma Alpha Epsilon and the intrafraternity council; Omicron Delta Kappa and the Texas Cowboys, the honorary service organization. In 1968, Evans received the Bill McGill award for being the outstanding member of the Cowboys; in recognition of his campus and community volunteer work.

Evans received his Bachelor’s of Science degree in Mechanical Engineering in 1969 and his MBA four years later, in 1973.

Even before he was appointed to the Board of Regents by then Gov. George W. Bush, Evans and Bush’s days together went back more than three decades. Back then, both were oil and gas wildcatters in Midland, scrambling to succeed in the rough and tumble energy business.  Evans remains one of Bush’s closest, and oldest, advisers. He helped in the campaign when Bush ran unsuccessfully for Congress in 1978. And Evans served in both of Bush’s gubernatorial campaigns and was named National Chairman of the Bush-Cheney 2000 presidential campaign.

Both Evans and his wife are on the Chancellor’s Council; members of the Littlefield Society, and life members of Texas Exes. Evans has also been involved with his local United Way, served on the board of the Scleroderma Research Foundation, and was named Jaycees Man of the Year. He was a driving force behind Native Vision, an “ America’s Promise” program that provides services to more than 10,000 Native American children around the country.

He warmly remembers his campus days: “From a rich reservoir of friendships, the University has provided me many opportunities to continue to expand my professional career as well as a chance to leave the world a better place than I found it.”

The Honorable Donald L. Evans resigned from the Board in January 2001 to accept the position of U. S. Secretary of Commerce.