To be honest, when I was young I never thought about being a teacher: later in life it just “came with the territory” of being in academia. What I discovered as a teacher, however, is how much I enjoy, learn from, and am inspired by, my students. Their passion for knowledge is both a challenge and a stimulus for me to continue learning myself.

Alisa has been teaching Anatomy at UT Southwestern since 1990. She is currently the Co-Director of the Human Structure course (Anatomy, Embryology, Radiology) for first year medical students, and Director of the Anatomy course for Health Professions students (PA, PT, and PO programs). Both courses focus on a cadaver-based dissection laboratory, and require extensive administrative, organizational, and teaching commitments. In addition to these commitments, Alisa is also on several committees (e.g., Team Based Learning and Pre-Clerkship Course Directors), and enjoys interviewing applicants for the Medical School. Alisa is the recipient of numerous teaching awards from the medical students, including seven Pre-Clinical Teaching awards and a Katherine Howe Muntz Award for Teaching in Anatomy (2010). The Human Structure course was awarded the Best Course award for first year courses in 2016. Alisa was awarded an Outstanding Educator Award, Health Care Sciences, from the Health Professions students in 2014.

Alisa has a somewhat unusual educational background for a faculty member at a medical school: she received a B.A. in Biology from the University of Virginia, Charlottesville in 1978. She then received both an M.A. (University of Texas at Austin, 1982) and a Ph.D. (Southern Methodist University, 1990) in Geology, specializing in mammalian Vertebrate Paleontology. While a Ph.D. student, she was ecstatic about an opportunity to take (and later TA) courses in Human Anatomy at UTSW, and subsequently accepted a Post-Doctoral Fellowship in Anatomy (functional morphology) at UTSW. At present, in addition to her teaching commitments, and some contributions to the higher education literature, Alisa maintains an active research program in Vertebrate Paleontology as a Research Professor in the Roy M. Huffington Department of Earth Sciences, Southern Methodist University, Dallas. 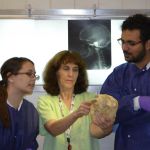 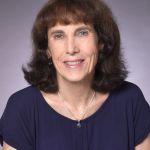