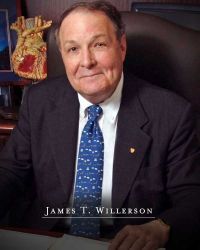 A renowned cardiovascular clinician scientist and leader in academic medicine, Willerson served as president of UTHealth from 2001 until 2008, guiding the institution through one of its most important eras of development, discovery, reputation and stability. Following his tenure at UTHealth, Willerson served as president, and then president emeritus of the Texas Heart Institute until his death in September 2020.

“Dr. Willerson was a giant in medicine whose brilliance, work ethic and intellect were revered across the nation and the world,” Board of Regents Chairman Kevin P. Eltife said. “We were fortunate to have had his leadership over many years at two UT institutions.”

Willerson was born in Lampasas and raised in San Antonio. He was the son of two physicians, and a fortunate meeting at age 14 with famed cardiovascular surgeon Dr. Denton Cooley would set him on a path to a life of service in medicine.

Willerson earned an undergraduate degree at UT Austin – where he also was a three-year letterman on the swim team – and a medical degree at Baylor College of Medicine. He received post-graduate training at Harvard Medical School and the Massachusetts General Hospital in Boston before returning to Texas.

He joined the UT Southwestern medical school faculty in 1972, serving as Chief of Cardiology and Professor of Medicine. In 1989, he joined UTHealth as Chairman of Internal Medicine and was invited to jointly serve as head of research at the Texas Heart Institute, alongside Dr. Cooley.

During his UTHealth tenure, he acquired support to construct eight new education and research buildings and recruit many outstanding faculty and researchers. He led UTHealth's first comprehensive campaign, and net assets more than doubled during his presidency. The acclaimed Brown Foundation Institute for Molecular Medicine was created through his vision. And he worked tirelessly to rebuild UTHealth’s facilities following the devastating destruction of Tropical Storm Allison. Even with all of his duties as president, he continued to teach medical students and see high numbers of patients daily.

When Willerson became president of the Texas Heart Institute, it was vitally important to him that the Institute have a strong affiliation with the UT System to collaborate on research and training. That affiliation is still maintained today.

“Like so many Texans, I was privileged to know Jim Willerson. His quiet but authoritative voice provided outstanding leadership, ensuring that all of those he taught, worked with, and trained had the best opportunity to be successful,” said UT System Chancellor James B. Milliken. “His thoughtful, personal touch, and his special devotion to his students and patients always earned him affection. He was often known as someone’s ‘most influential mentor,’ ‘my favorite physician,’ and the person who ‘saved my life.’”

At UTHealth and the Texas Heart Institute, Willerson pioneered research on the use of stem cells in repairing hearts and blood vessels injured by heart attacks, resulting in the first FDA-approved trial of human stem cells to treat ischemic cardiomyopathies and congestive heart failure. Today, UT Austin's Center for Cardiovascular Modeling and Simulation bears his name as do fellowships, chairs, lectureships, scholarships and programs at UT Southwestern, UT Austin, UTHealth, and the Texas Heart Institute.

Willerson was visiting professor and invited lecturer at more than 260 institutions worldwide, a Fellow of the Royal Society of Medicine of the United Kingdom, an Honorary Member of 10 foreign Societies of Cardiology, a member of the National Academy of Medicine, and the recipient of the American Heart Association's highest honor, the Gold Heart Award. He also was inducted into UT Austin Athletics’ Hall of Honor and was named a Texas Exes Distinguished Alumnus.