With a unanimous vote by the UT System Board of Regents, William C. Powers, Jr., was named President Emeritus of The University of Texas at Austin on Thursday. 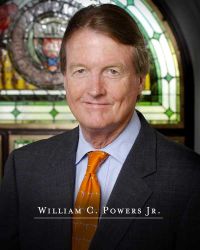 A beloved teacher, a nationally recognized legal scholar, and an advocate for top public research institutions, Powers was the second-longest-serving president in UT Austin's history, serving in that position from 2006 to 2015.

Known for his collegial relationships with students, faculty, philanthropists and elected officials, Powers continued to teach until his death in March 2019.

“Bill Powers was higher education’s quintessential leader and his impact at UT Austin will be everlasting,” Board of Regents Chairman Kevin P. Eltife said.  “He set an ambitious goal to elevate an already-world class institution and never stopped pushing the bar higher, no matter what UT Austin achieved.”

Powers' service at UT Austin spanned 40 years, beginning when he joined the faculty of the School of Law in 1977. He became one of the nation's foremost experts on torts and served as dean of the law school for six years prior to becoming president.

He was also recognized for leading a university-wide curriculum transformation with a focus on ensuring students graduated with enhanced skills in thinking, writing, speaking and reasoning. The initiative included new degree requirements, such as signature courses in writing and public speaking, along with the creation of the School of Undergraduate Studies, dedicated to offering academic programs and support for students who had not yet declared a major.

During Powers' tenure, the Dell Medical School – the first new medical school at a top public university in decades – was established, and he presided over the completion or construction of 13 major buildings. One of these buildings includes the Student Activity Center, which was posthumously named for him in 2019. Powers also led the successful completion of a $3 billion capital campaign – the largest ever undertaken at a public university in Texas – and the launch of the Longhorn Network in 2011.

He established a vice presidency to oversee diversity and community engagement at UT Austin, and, on the national front, Powers was a leader in efforts to recognize and promote the educational benefits of diversity. Under his leadership, UT Austin successfully defended its use of race and ethnicity as a factor in admissions before the U.S. Supreme Court.

“President Powers’ contributions to UT Austin will impact generations of Texans,” said UT System Chancellor James B. Milliken. “Every action Bill took reflected his commitment to UT as a ‘university of the first class’ and his devotion to the students, faculty, staff and alumni of the Longhorn Nation.”

In 2013, Powers was elected chairman of the prestigious Association of American Universities, in part in recognition of his defense of the mission of public research universities throughout his career. Other honors included the John G. Fleming Memorial Prize, the Robert B. McKay Award from the American Bar Association, and the Distinguished Service Award from the Texas Exes in 2016.